We started hearing about the Intense Racing UK team around Saddleback’s House Show back in September. This got Tom and I really excited, being keen mountain bikers ourselves we would have killed for the opportunity to film with a professional race team! In the final days of February, our dream came true. 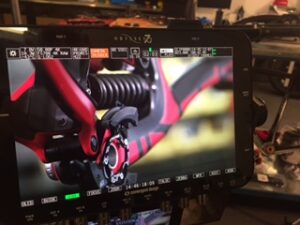 Before a spectacular day filming in the forest, Tom and Craig were lucky enough to travel down to Bristol and film the team during a strength training session and their orientation, with a little bit of fun thrown in at Airhop!  A few days later, they got to go to Saddleback HQ in Yate and film the assembly of the team’s downhill bike, the Intense M16. Spot our bike build shot at 00:45 in the edit! 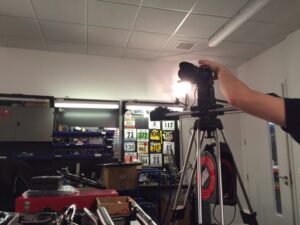 Our sliding bike build was made by taking a series of slider shots all done by the fantastic Edelkrone motion control unit. Using this made it easy to make sure we got the same speed across the duration of the shot. As we finished each slide, there would be a new part added to the bike. Moving from frame to full build in just a matter of seconds, all with the same sliding motion! 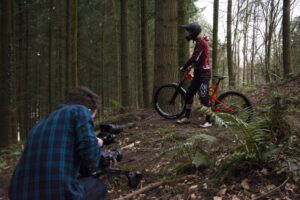 Then came the big day, the forest shoot. All the riders turned up tooled to the hilt with gorgeous bikes and brilliant kit, we were ready and waiting with all the helping hands we could muster! We headed up to the first shoot location for 9am, a few hidden trails just a stone’s throw from the Pedalabikeaway Centre. Luckily the weather was on our side and gave us some of the best conditions for the riders to really show us what the new Intense Tracer was capable of. From pulling awesome manuals to smashing roost out of a berm, they threw all they could at it and it still begged for more! 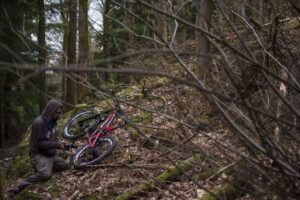 We moved to the Sheepskull and Ski Run tracks to really make sure the downhill bike performed to the best of it’s ability. Each rider gave it their all and we captured some great footage, gliding over roots and hopping from lip to landing. We used the beautifully simple DJI Osmo paired with the X5 Gimbal to capture some closeup shots of the bikes, you can spot these in the opening sequence of the video, the ease and light weight of the Osmo paired with the powerful X5 meant that we got brilliant 4K footage of the bikes close and personal.

A few spills and near misses from the team made for some exciting on camera moments. The bright orange team colours of the Tracer made for some stunning footage in the dark woods. We played around in the woods for the morning before heading over to the main trails at the Cannop site. This time it was the M16 to be put through it’s paces. For anyone that knows the Cannop site, they’ll know the push up hill is not ever so friendly and it’s even worse when you’re carrying 10kgs of camera on your back!

Tom knuckled down as soon as we got into the office and started editing an incredible trailer along with the full piece. Trying to talk to him whilst he was working on this proved difficult! The boy was in the zone, powering through and doing some brilliant work with the footage we had! With loads of positive feedback from the guys at Saddleback, we were incredibly happy to say the least. It drew closer and closer to announcement day and we were so excited to see the final thing and catch the reactions of all the riders and visitors to the house show! Needless to say, they all loved it and the riders were incredibly happy that they looked fast and smooth through some rough tracks!

What more convincing do you need? Go watch it, and hopefully we will be back soon with more incredible riding from the guys at Intense Racing UK!

Big thanks to everyone that came out and helped the team, special mentions go to Aaron Jones, Naomi Jones, Alex Camper, Theo Levey and Scott Rudman 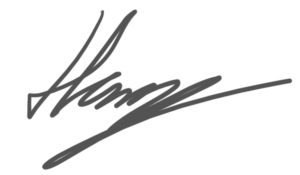